The Jewel of North Africa

Morocco Country is a Land of Dramatic Contrasts

The ancient Morocco Country, long known as “The Jewel of North Africa“. an exotic country, which has, in many ways, remained unchanged over the centuries.

It occupies the whole of the northwestern corner of Africa, both sides of the Straits of Gibraltar, bordered by Algeria to the east and Western Sahara to the south-west.

Moroccan Sahara annexed by King Hassan of Morocco in 1975. Its future will be determined by an UN-supervised referendum.

Morocco is a large country, 274,414 square miles in area, or about three times the size of the UK. Western Sahara adds another 102,675 square miles to this area.

The south of Morocco Country

The south of Morocco Country, meanwhile, faces the Atlantic Ocean and the eastern side. Is semi-arid, for this is the western edge of the great Sahara Desert, the biggest desert region in the world!

The dry climate over much of the eastern part is caused by its location in the rain-shadow of the Atlas Mountains which form a chain across the middle of the country, from the north-east to the south-west.

The High Atlas, or “Haut Atlas” reach heights of 4000 metres or 13,100 feet, so the Mountains continually snow-capped. The greenery of the north contrasts greatly with the aridity of the south and east. Not only are there contrasts in the landscape! Morocco Country is an exotic land full of contrasts. It is profoundly traditional, yet, at the same time, strongly drawn to the Western World.

While its roots are unquestionably North African, Morocco also exudes a distinctly European air, mixing Arabic charm with a little of the French and Spanish colonial influences of the past.

Meanwhile, Spain renounced control over its territories here, in the same year, except for the enclaves of Ceuta, Melilla and Ifni and territories in the south.

Sidi Ifni returned to Morocco in 1969.  But Spain still retains the two External Provinces of Ceuta and Melilla on the North African coast.

The capital of Morocco

The capital of Morocco Country is the imperial city of Rabat, on the north-western coast, facing the Atlantic.

Further down the coast, to the south-west of Rabat, and linked by a highway, is the major, world-famous city of Casablanca. Forever linked to the great Humphrey Bogart, in the minds of millions of cinema-goers!

The very name, Casablanca, which in English is plain “White House”, attracts droves of curious tourists.

The City of Fes Imperial City

However, of greater cultural interest to visitors is the imperial city of Fes [or Fez], at the foot of the Atlas Mountains. This is a fascinating historical city.

Marrakech is the best of Morocco Country

Even more interesting, though, is Marrakech [or Marrakesh], which is known as the red city, because of the traditional terracotta colour of its buildings.

Magical Marrakech has a memorable beauty, located inland and set against the dramatic backdrop of the High Atlas mountains.

Palm-lined streets and a huge medina of flat-roofed red houses, watched over by the 65-metre minaret of the 12th Century Koutoubia Mosque.

It is a lively atmospheric city with a maze of narrow alleyways, markets, mosques, museums and palaces.

Do not miss a visit to the old town and its main square, Djemaa el Fna [sometimes written”Jemaa el-Fna”].

This truly exotic square bursts into life as dusk falls, with dancers, musicians, traders, food stalls, acrobats, jugglers, fortune-tellers and even snake charmers, catering for, and entertaining, the great mass of people that come here!

Agadir Morocco is an amazing experience!

From the vibrant souks of Marrakech, where better to relax than sun-soaked Agadir on the Atlantic coast of southern Morocco Country?

This is a modern, relaxing resort that has gradually developed along an impressive 10 kilometres, or 6 miles, of golden sands.

Blessed with year-round sunshine, it makes for a perfect winter break.

It has all the facilities, plus watersports, of any modern holiday resort. Agadir has a colourful souk and a long promenade for leisurely evening strolls. It has a huge range of cafes, restaurants, bars and nightspots.

It is possible to book a twin-centre holiday, staying in both Marrakech and Agadir. A wonderful contrast!!

Fifty miles to the east of Agadir is the oasis town of Taroudant, known as”Little Marrakech”. An ancient citadel, encircled by beautiful dusky pink walls, with turrets and towers. It boasts an atmospheric kasbah and a colourful souk.

Morocco Country is a fascinating country, combining modern tourism facilities with scenes reminiscent of the middle ages. It will provide you with an unforgettable holiday, very different from anything in Europe if you choose to go looking for that difference!!

You can even go skiing in the Atlas Mountains, or enjoy hill-walking holidays amidst stupendous mountain scenery, surrounded by a great variety of wild-life, especially birds!

Why not give it a try? Morocco Country might surprise you with its contrasts! 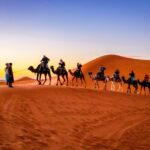