Jewish Tour in Morocco for 9 Days

This journey of Morocco Jewish Tour takes you through a melding of Jewish and Arab cultures. Along with Berber, Spanish, Roman, and other influences. Morocco’s Jewish history dates back to 1492. Upwards of three million European Muslims and Jews emigrated to or through Morocco after being driven out of Catholic Spain.

In the multifaceted history of Morocco, Jews have lived alongside Arabs and Berbers for centuries. While retaining ancient traditions, customs, and culture. Immerse yourself in the rich history of the Moroccan Jewish community. Which has always been, and still is, one of the largest in the Arab world.

Today there are approximately 700,000 Jews of Moroccan origin living in Israel, and around 30,000 Jews still in Morocco. Strong ties between Morocco and Israel enable Morocco to maintain a unique position in Arab-Israeli relations. Morocco’s kings have brokered peace and welcomed Israeli leaders on official visits.

Your window to the rich heritage of Morocco opens with a welcome by your private driver upon your arrival at Casablanca. After a brief tour of the highlights of Casablanca, home to the largest Jewish community in Morocco, travel to Rabat, Morocco’s present-day capital and principal royal residence.

Tour the narrow lanes and colorful courtyards of the Mellah (Jewish Quarter) then recuperate from your travels amid the trees and flowers of the city’s tranquil gardens. In the morning, depart for Meknes, a former capital whose medina walls are adorned with exquisite gates considered among the best preserved in the Islamic world, and active and historic synagogues feature Hebraic and Greek inscriptions.

Then on to Fez, the intellectual and religious heart of the nation, for a few days of exploration. Tour Fez el-Bali (“Fez the Old”) and its medieval medina (old town), a UNESCO world heritage site crammed with narrow, winding streets, tiny squares, and artisan workshops.

Visit centuries-old mosques, synagogues, and universities, see the multi-colored vats of the open-air tanneries, and shop for traditional wares made from copper, ceramics, and leather. Also visit Fez el-Djedid (“Fez the New”), built in the 13th century, and home of Morocco’s first Mellah, in the shadow of the Royal Palace.

A highlight of the Mellah is the fascinating Jewish Cemetery and Habarim Synagogue, now a museum with detailed genealogical records. Excursions to the countryside reveal the near-perfectly preserved ruins of Volubilis, a thriving Roman settlement until the 4th century. Just beyond Volubilis lies the holy city of Moulay Idriss, a scenic whitewashed town where the first Arab dynasty was founded in 787 AD.

Next head over the Middle Atlas Mountains, traveling through fragrant, dense pine and cedar forests, terraced farms, and sienna mud-brick Berber villages. Lunch in Midelt, a sleepy village bursting with colorful minerals and fossils on display by roadside vendors.

As you approach central Morocco, and the dramatic escarpments, plunging ravines, and palm-filled gorges of Ziz Valley, you pass through the oasis region of Erfoud, a desert outpost where hand-loomed Berber rugs are bargained for over mint tea.

Nearby Merzouga is the point of departure for your Sahara Desert immersion. Explore the mystical landscape as you ride on camelback, led by a Bedouin guide robed in the flowing blue garb of the Tuareg people, through the stunning sands. As night falls, delight in a Moroccan feast cooked in the elements.

Sleep in a nomad tent beneath the innumerable stars of the clear desert sky, or in a comfortable hotel in searing summer months. Awake with the sunrise to watch the colors of the desert change before your eyes. Continue your journey through the Dadès Valley and its Road of a Thousand Kasbahs that rise up like turreted sand castles along this ancient caravan trading route.

Stop in the Todra Gorge to marvel at the natural force that carved this quiet Berber oasis and rock-climbing haven. Overnight in Ouarzazate, a thriving trading post and Morocco’s modern-day Hollywood. Next, traverse the breathtaking snow-capped peaks of the High Atlas Mountains, the largest mountain chain in Africa.

Stop en route at the fortified village of Ait ben Haddou, a UNESCO world heritage site and the backdrop for famous films such as Lawrence of Arabia and The Last Temptation of Christ.

Continue to Marrakesh, an ancient oasis city of weathered pink buildings and orange groves. Tour the fascinating local souks (markets), stunning palaces, lush gardens, and historic monuments. Tour Marrakesh’s Mellah, established in the 16th century. Once the home of a thriving community of native and Spanish Jews. The Palais de la Bahia, the Dar Si Said Museum of Moroccan Arts, and the beautiful Jardin Menara. Its reflecting pools surrounded by a large grove of olive trees. Witness the carnivalesque public square Djemaa el-Fna. As water sellers, snake charmers, magicians, and storytellers compete for an audience. Celebrate the conclusion of your journey by dining at a centuries-old former palace.

Accommodations on this Morocco Jewish tour:

Features of the Morocco Jewish Tour:

The activity level of the Morocco Jewish Tour:

Easy to Challenge, depending on your preference

See Book Your Trip to request the complete itinerary for the above tour, or Customize Your Trip to begin customizing your own itinerary For Morocco Jewish Tour. 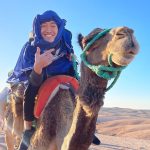