An oasis in every sense of the word

Marrakech was once a beacon for the trading caravans that had driven north through the desert and navigated over the often snow-capped Atlas Mountains.

Marrakech may be Morocco’s third most important city after Rabat and Casablanca, but its fabulous palaces and lush palm groves exercise a powerful hold over tourists. It has always been the place where sub-Saharan Africa meets Arab North Africa, and, even today, this market town located on the edge of nowhere remains a compellingly exotic port of call.

Just in Marrakech Morocco, this is a vast plaza at the heart of the medina (the old walled city), as old as Marrakech itself. The site of parades and
executions in the past, modern city life is centered around the Jemaa El Fna.

The medina’s central square means “Assembly of the Dead”. A reference to a time when the heads of executed criminals would be displayed here on spikes. Although nothing as gruesome is on view today. The square is still
populated with some extraordinary sights such as snake charmers, monkey trainers, and colorfully-costumed water sellers. In spite of government efforts to sanitize Jemaa El Fna with neat paving and ornamental barrows, the place remains endearingly chaotic.

The first to appear on the square every morning are these sellers of freshly squeezed orange juice. They work in brightly painted iron barrows fringing the square.

Snake Charmers The heat makes the snakes unresponsive so the charmers work on tourists, cajoling them into draping the lethargic reptiles over their shoulders for a photograph.

There are several places to sit and watch the incessant entertainment of the square over coffee. The raffish air of the Café de France lends it an added appeal and is a favorite with tourists and locals alike.

These stand as testimony to the Moroccan belief in natural remedies. Compounds of ground roots, dried herbs, and even desiccated animal parts are used for everything, from curing head colds to warding off the evil eye.

With cars banned from crossing Jemaa El Fna. As a result access to many of the hotels in the surrounding alleys is provided by the ubiquitous porter (carroser). Who carries your luggage on a wheeled barrow and transports it to your lodgings for a small tip.

Small monkeys dressed in bright tunics are brought to the square by their keepers to caper and dance for tossed coins.

Hop into one of the waiting calèches, or horsedrawn carriages, parked along the square’s west side. For a fee, you may need to bargain down from the driver’s inflated price. You can make a circuit of the city walls, or almost anywhere you care to go.

Water Sellers also knew by the locals as ‘Gurrab’. The water sellers roam the square in colorful costume and tassel-fringed hats, ringing copper bells to announce their arrival. The brass cups are meant exclusively for the Muslims while the white-metal cups are for the thirsty people from all other religions.

Throughout the day, impossibly wrinkled, also elderly women squat beneath. Umbrellas with packs of Tarot cards to
hold forth on the fortunes of the people who drop by for a reading. 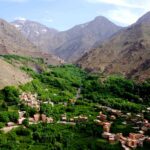 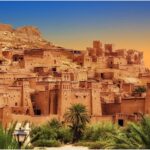