Medersa Ben Youssef Marrakech was not an option for any student who had an interest in seeking knowledge in different sciences, including theology. It remained to be the perfect destination for these types of students for over four centuries. Those students who were not coming from Marrakesh had access to 132 rooms. Other than this, Ben Youssef Madrasa Marrakech remained to be the perfect option because of its ability to accommodate up to 900 students.

Moroccan, identified as Monarch Abu el Hassan, founded this Koranic school at the beginning of the 14th century. The Saadians enlarged and renovated this building in the year 1570, which later became the largest college in the entire Maghreb region. Starting from this period, the school catered for up to 900 students, and most of them lived here to study law and theology.

The students in this Koranic school received support from the monarchy in terms of food and lodging. However, the kitchen remained at the hands of the students since they never received help on this side.

In the year 1960, Ben Youssef Madrasa changed from the Koranic school into a museum. Its renovation that took place in the year 1999 is the reason this place remains to be the most famous site in Marrakech. One of the most impressive masterpieces associated with this college is the bronze doorway located at its entrance. This bronze doorway features stunning mosaic and cedarwood carvings, which attract the attention of most visitors.

Other than this, the walls and columns of this college feature impressive sculptures and stuccoes. On the second floor, you will have a fabulous view of the large patio and the student rooms that surround small courtyards.

The prayer room, which features three marble columns, is also another place you will want to see. If you look up, you will see an attractive dome. The contractors crafted it cleverly from cedarwood, and it features 24 small mosaic windows.

The strategic location of Medersa Ali Ben Youssef also contributes a lot in attracting the attention of many visitors. Medersa Ben Youssef revolves around a large courtyard that features a central pool for ablutions. Colorful zellige tiles, carved cedarwood, and elegant stucco are some decorations covering the buildings. The interior of this place features a variety of patterns of palm trees and pine cones. 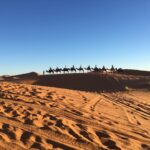 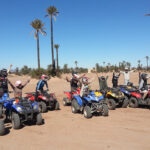 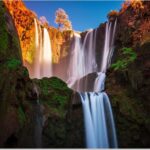